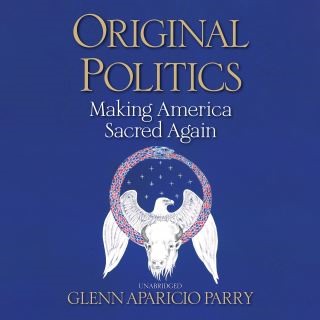 To recreate a whole and sacred America, it is important to piece together the forgotten fragments of history that are currently keeping the country divided. Just as a traditional Native American potter begins a new pot with shards of old pots—honoring the ancestors, bringing the energies of the past into the present—Original Politics reconstellates the nation as a whole out of the seemingly disparate shards from our origins. The most significant forgotten piece is the profound effect Native America had on the founding values of this nation.

Original Politics convincingly demonstrates how the best aspects of the founding vision of America were inspired, or directly appropriated, from living, Native American cultures: concepts such as natural rights, liberty, and egalitarian justice. Further, Parry traces the influence of Native America not only on the founding fathers, but on the ‘founding mothers’ of the nineteenth century women’s movement; as well as the nineteenth century abolitionist and modern ecological movements. Native America has inspired what Parry sees as the sacred purpose of the nation: bringing all the world’s peoples together on one soil in a harmonious cultural mosaic of unity in diversity. While there have been periodic setbacks (devolution) in our nation’s history, including today, these only serve as catalysts reigniting our sacred purpose. America is creating a new melting pot, and like the original vision, it will be a creation from the many into the one—only this time it must not leave anyone out. This includes the natural world.

Original Politics is ultimately about respecting all forms of life and all forms of political expression as different aspects of one whole. It is a reclamation project that brings people, land, and nation together as one. The overall effect of the book is profoundly healing.

Glenn Aparicio Parry, PhD, is also the author of the Nautilus award–winning book, Original Thinking: A Radical Revisioning of Time, Humanity, and Nature, and an educator, ecopsychologist, and political philosopher whose passion is to reform thinking and society into a coherent, cohesive, whole. The founder and past president of the SEED Institute, Parry is currently the director of a grass-roots think tank, the Circle for Original Thinking. He lives in northern New Mexico.